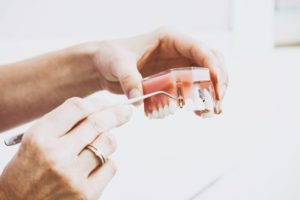 Gingivitis is a common disease, but many people don’t know much about it. The literal meaning of gingivitis is inflammation of the gums or gingiva. This inflammation commonly occurs due to a film of bacteria accumulating on the teeth. It is a non-destructive type of periodontal disease. However, if you leave gingivitis untreated, it can lead to more serious disease such as periodontitis and eventually tooth loss. Here is all you need to know about gingivitis, how you get it, and how to treat it.

What Are the Types of Gingivitis?

Several things can cause gingivitis such as hormonal changes, drugs, smoking, age, and poor diet. However, the most common cause of gingivitis is the accumulation of bacterial plaque. This plaque begins to form in between and around the teeth. The plaque triggers a response from your immune system. The immune system’s response begins to destroy the gum tissue causing gingivitis If this is left untreated and the plaque starts to harden, it then turns into calculus. Calculus has a more yellow tent to it and forms at the base of your teeth, near your gums. It is harder to remove than plaque and requires professional assistance.

What Are Signs of Gingivitis?

While gingivitis can often cause pain, mild cases sometimes cause no discomfort or show any noticeable symptoms. However, there are some signs that it may be time to visit the dentist. Some signs and symptoms of gingivitis include bright red or purple gums, tender gums, gums that bleed while brushing or flossing, receding gums, softs gums, bad breath, and inflammation.

If gingivitis is caught early enough, it can successfully be reversed. If you are having problems with your teeth or gums and see any signs that may indicate that you have gingivitis, it’s time to visit a healthcare professional. With Dr. Ross, you and your oral health are our number one priority. We can catch early gingivitis and stop it in its track. To set up an appointment today contact us at (559) 732-3972.